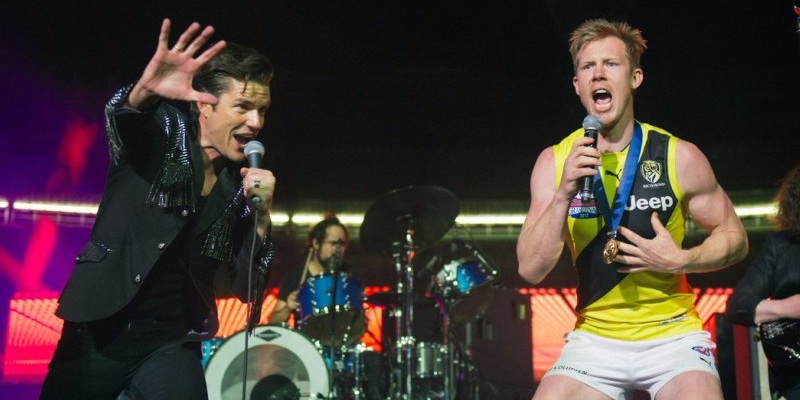 Spare a thought for Melbourne’s best known event producer and AFL tragic. In the podcast I did with Peter Jones he told me about being born into the Melbourne Football Club, he attended his first game around 1966, two years after they last won an AFL flag.

So this year, his first chance to produce the GF with his beloved team on the paddock and he will be watching from home, because, like Eddie Maguire, he is not considered an essential worker (but apparently the footballers and their handlers are).

Peter told ASE that he has put the program together and it will be delivered by the team at the WA stadium. And it will be great line up of mostly WA talent.

Peter’s fondest GF moment from those he has managed was in 2017. “The Killers were amazing in the pre-game and then Jack Riewoldt getting up to sing with them at the post match concert was a moment I won’t forget, especially considering how it all happened.” Watch on YouTube

A Tale of Two Cities

When I quoted Charles Dickens on Monday I was not expecting to see Melbourne then go on to resemble Paris, July 1789

“Come, then!” cried Defarge, in a resounding voice. “Patriots and friends, we are ready! The Bastille!”

With a roar that sounded as if all the breath in France had been shaped into the detested word, the living sea rose, wave on wave, depth on depth, and overflowed the city to that point. Alarm-bells ringing, drums beating, the sea raging and thundering on its new beach, the attack began.

IN ASE this week

How about shaking off the shutdown blues, grab a drink and join Brett Bower for a Zoom drawing workshop tonight.

Congratulations to all the winners in the Meetings & Events awards that were presented online this week – follow the link above for all the national winners.

Victorian Roadmap for events and entertainment

Hope for the best but expect the worst

Peter Jones assesses the Victorian Roadmap Hope for the best but expect the worst. The proverb kind of sums up the Victorian roadmap released yesterday when it comes to events. About the only mention of something resembling an event were weddings and funerals and I really can’t see a rush on October 26 – certainly nothing before then.

Now we have a roadmap, we need to meet

Gary FitzRoy reflects on face to face contact with clients and Expo visitors.  I raise the point because it reflects the sentiments of exhibitors who have come to realise how important and enjoyable it is actually meeting with clients.

Regional areas across the country are at risk of not only huge economic losses, but Australian Regional Tourism warns recovery for many is no more than a pipe dream.

How are regional events faring?

While city events get the most notice, regional events are often ignored. However events are for more important to the regional towns and cities than they are in capitals. ASE reached out to Vanessa Briody Co-Director of Oregional Collective and a member of the Australian Regional Events Alliance for a take on how they are faring.

Sydney theatre is coming back

OK, I don’t normally do theatre reviews but I got to see Come From Away on opening night – two weeks later all events and theatre productions in Sydney were shut down. This production struck a chord with me, so I wrote a review.

This week’s podcast repeat is with Ruth Lilian

Ruth is an organiser.  She became one of Australia’s first In-house PCOs through her work as a Practice Manager for a group of doctors then went on to manage a number of medical associations.

NSW is expected to reach 70% vaccination in time to reopen on Monday 11th October and then the 80% target should see further restrictions eased on Monday 25th October.

However at this stage the remaining restrictions are still unclear. At 70% were have been told to expect that venues can reopen at 4 sqm per person or 75% of fixed seating capacity – unless it is for a wedding or funeral, in which case they are restricted to 50 guests (go figure).

The great unknown is what will happen at 80%.  The hope is that restrictions will ease to 2 sqm per person, in which case corporate dinners are pretty much back to 100%.

So here is the Sydney wrap

Theatre – the two big shows in Sydney (Come from Away and Hamilton) have announced a return to the stage from October 19th. Other theatres are you to announce reopening.

Major event venues – ICC Sydney is preparing to reopen at the 70% mark according to CEO, Geoff Donaghy “We have over 90 events in the diary from October through to Christmas and we’re contacting our customers to ensure they are able to proceed with a fully vaccinated workforce, event attendees, suppliers and contractors – everyone that will need to enter the venue.”

Specialist event venues such as Navarra, Doltone House and The Venue Alexandria are just waiting on the green light from the NSW government via the promulgation of the health orders. While each of these venues told ASE they are ready to go, they are not expecting a rush, as both corporate and private customers need time to plan. They are expecting small corporate events only and for clarification on the 50 pax limit for weddings.

Sydney cancels 9pm NYE fireworks despite being weeks away from reopening

The City of Sydney has cancelled this year’s New Year’s Eve family fireworks display despite the state’s scheduled reopening in the coming weeks, saying the move is necessary to keep the event “resilient” amid the uncertainty of COVID-19.

However the sticking point for venues is going to be policing access to only those who are vaccinated.

How NSW’s vaccine passports will work

Venues including pubs, restaurants and hairdressers will be allowed to reopen to fully vaccinated customers the Monday after NSW hits 70 per cent vaccination coverage of people aged 16 and older.

This week the NSW Minister for Customer Service Victor Dominello, announced that a “vaccine passport” trial will be running in regional NSW, as the state gears up to open up at 70%.

The trial will run for two weeks from 6 October, and would allow people to display their vaccination status via the Service NSW app, the same used for check-ins.

But Dominello also said that the technology would not be ready by the time the state hits 70%, even though he was “moving heaven and earth” to get the system up and running as soon as possible.

Martin Foley was asked today at the Victorian presser if theatre and arts groups will be allowed to start performing again once the state hits 80%.

“Of course, we want to make sure that Melbourne and Victoria, as the arts and culture capital of the nation gets back onto its feet after a really tough 20 months, as soon as it possibly can.

These are sectors that closed on 13 March last year. And very few have reopened for a very short period of time. We are working through those processes with Creative Victoria, with particular companies and organisations, with our health team, to make sure that they are in a position when they need to crank open again, when we hit 80, that they are able to do so.

These are challenges, without doubt, because those companies want to make sure that their workforce, their actors, their musicians are all safe and that they don’t contribute to a wider resurgence of COVID once we do reopen, and I’m confident that we will get through those issues and that our vibrant arts and culture sector will start to gather momentum.”

So the uncertainly continues – stay safe

Dormant, billion dollar white elephant venues, thousands out of work or on Jobkeeper, and hundreds of events …

“Glimmers of hope to potentially broke”

The recent announcement of the $250 million support package for the arts community is wonderful news, but …