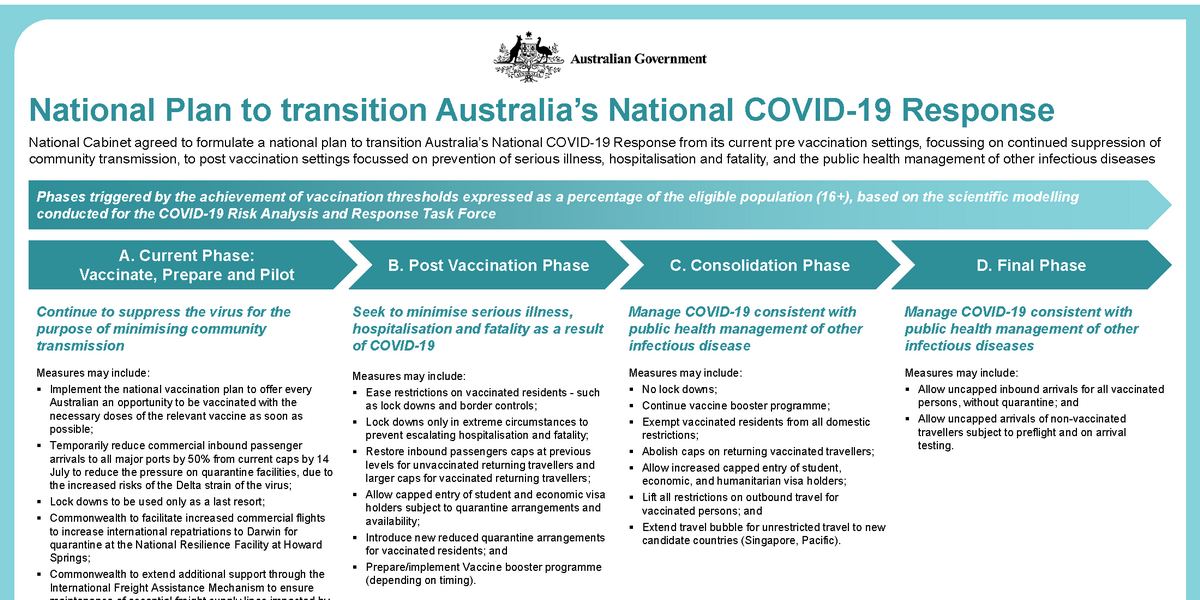 Making sense of the COVID transition plan and could Sydney reopen in September?

We keep hearing about the transition from Phase A to Phase B happening at 70% vaccination and then to Phase C at 80% vaccination.

First up what are those vaccination rates and how do they compare to overseas? Once again I defer to Dr Norman Swan.

The rate referred to is 70% or 80% of the “eligible” or “adult” population – which is people over 16. Which is around 80% of the total Australian population.

So 70% of the adult population is about 56% coverage of the total population.

Norman Swan: 56% full coverage is pretty much exactly what you’ve got in Britain and America at the moment, a bit more in Israel, and what you’ve got are major outbreaks of the Delta variant in both countries.

So, 56% is not enough to control it. So at that point you’ve got a bit of control, you’ve got maybe half the population who are able to resist the infection a little bit, maybe half of them will resist infection altogether and they will get mild illness, they may or may not be less likely to pass it on, we don’t know that for sure yet. So it’s not enough to control it.

So you’re getting to a point where you can start the process of opening up but very, very slowly. You can’t do what Britain did, which is have a Freedom Day, you’ve really got to have masking, social distancing, be prepared to go to lockdowns, because you’ve got the possibility of it taking off.

And 80% vaccination still doesn’t allow you full opening because, again, that’s not 80% of the whole population.

So the international modelling and local modelling outside the Doherty would say that 80% to 90% of the whole population needs to be immunised for you to really be able to open up and, to be fair to the Prime Minister, he was indicating that as he moved forward.

Tegan Taylor: Right, so we are just managing expectations now.

Tegan Taylor: So one of the big things that was missing for me when I was listening to the Prime Minister on Friday night was timeframes. Do we have any sense of how long it’s going to take for us to move through these next couple of phases?

Norman Swan: My understanding is that the modelling about the vaccination rates would have us at 50% or 60% of the eligible population with two doses by Christmas, certainly early December. So we are not at 70% of the eligible population this year unless you get a rapid escalation of immunisation, which we could do. They are managing to do it in New South Wales and we could do it nationally as well. But you’ve got a problem; Western Australia has very low immunisation rates compared to the rest of the country, for example.

For anyone who has worked on a medical conference you would be used to slide decks filled with data and graphs that are almost unintelligible to us mere mortals. Well that is what was presented yesterday and obviously the journalists at the media conference also struggled with it.

Once we get to 80% vaccination, and there is no outbreak, we return to “normal”

However the virus is still highly transferrable so if an outbreak occurs the short sharp lockdown is the way to go – to stop the virus in its tracks.

This is what Vic, SA and Qld did with their latest outbreaks and what NSW didn’t do.

But then eventually as you vaccinate more and more people the virus has less and less people to go to.

“Get to a certain level and you don’t need lockdowns anymore because the vaccination is doing the job of the lockdowns”.

Swan also points out the NSW is key “you can’t open up the country if New South Wales is still getting a couple of hundred cases a day.”

“And then each person has got to make up their own mind about Astra. If you live in New South Wales or indeed south-eastern Queensland, I think there is little argument here, if there’s a one in 50 chance if you get infected you’re going to end up in ICU, you probably want to bear your arm for Astra. In other states you’ve got to make up your own mind, I’m not going to push one way or the other, but the equation is pretty strong. The sooner we get vaccinated, the sooner we get out of this”.

So in the end what does this mean for the event industry?

In a word “uncertainty”. We will continue to live with snap lockdowns until we reach 80% vaccination and then move to Phase C.

Yes. The uncertainty will continue because snap lockdowns will not end until we get to Phase C and that is estimated to be after Christmas.

However Swan does hold out some hope for living with the virus. And as early as next month in NSW.

Tegan Taylor: So it is nice that there is some light at the end of the tunnel, even though it still seems a fair way away.

Norman Swan: It may not be that far away, we might get to those vaccination rates in New South Wales by, say, the beginning of September, which might mean that during September you do start to see that measure of control flowing through the system.

And this could be the future for Sydney?

Tegan Taylor: Okay, so when we are talking at the moment, we are really talking about phase B, a fairly early phase of this rollout plan. Once we get beyond that 80% of people aged over 16 being covered with the vaccine, what shifts?

Norman Swan: Well, what shifts has to be our attitude, and in fact New South Wales might be the stalking horse for this because New South Wales might not get down to zero spread, it might get down to lower levels than it’s at now, and New South Wales people are going to have to get used to…potentially if you get to very high vaccination rates by the end of August, but you still haven’t shifted the curve that much and you’re getting 100 cases a day, then New South Wales will show that you can live with 100 cases a day or 200 cases a day and the world doesn’t fall apart because our hospitals aren’t full, people aren’t dying, and they are not going into ICU because you’ve targeted the vulnerable, and the younger people who are the bulk of the transmitters are also well covered and they are not ending up in ICU either.

So those are the things we are going to have to get used to moving forward. In other words, the future may be now for people living in New South Wales because you get used to a certain number of cases a day, but realising psychologically that you don’t need to fear that when you’ve got high levels of vaccination and very low rates of harm.

‘There is no going back’: experts on what Australia’s Covid modelling reveals

Path from lockdowns hinges on testing, tracing and quarantine measures

Small businesses brace for ongoing COVID-19 restrictions, even after 70% vaccination threshold is met

Is a curfew worth trying for Sydney? What the world’s experts have to say

Coronacast
COVID-19
Email
No comments yet

The exhibition industry has been one of, if not the worst affected industries as a result of …

When you ask for specific information regarding restrictions on events.

On the 10th September, following a number of phone calls to get access to an email address …

Will Sydney reopen after two more weeks of lockdown?